The Australian Outback’s Strangest Creature of All

We have a lot of strange and unusual creatures in the Australian outback, and I’ve written about quite a few. We’ve got…

So it just can’t get any weirder, can it?

Hold on a minute! Didn’t my post two weeks ago about Feral pigs start in exactly the same way?

Yes, it did, but when I said then that it can’t get any weirder, I secretly knew that it would. How weird?

I suspect we have all heard of Bigfoot. Well a yowie appears to be the Australian equivalent. Apparently, we have at least two kinds of yowies here; little ones and big ones.

There is a wooden statue of a yowie in Kilcoy, here in Queensland and to be honest, I don’t know if this is a little one or a big one. If it is a little one, I wouldn’t want to bump into a big one anytime soon. 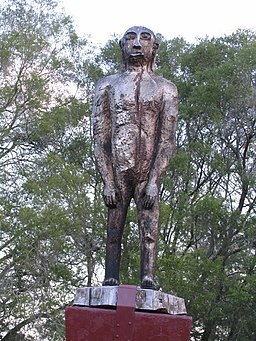 What is a Yowie?

‘Yowie is the term for an unidentified hominid reputed to lurk in the Australian wilderness. It is an Australian cryptid similar to the Himalayan Yeti and the North American Bigfoot.’ – Wikipedia

At first, I thought this was just another “Loch Ness Monster” type story, but having looked into it I’m not so sure, there have been a huge number of sightings.

Search Google for “yowie” and you’ll find all lots and lots of information and many stories.

One site that got my attention was Dean Harrison’s Australian Yowie Research and they do a very good job of explaining what a Yowie is. If you want to know more, visit YowieHunters. But, if I may borrow from their knowledge, there are at least two known sorts of yowie here; the smaller 4 to 5 foot yowie and the bigger 6 to 10 foot species.

Or, as I put it earlier, little ones and big ones.

Do they really exist?

Again, if you check out the site mentioned above, in the left-hand side you will see a menu for Reports/Sightings. There are a lot of sightings listed in every single state of Australia.

But are all these sightings (let me be blunt) reported by nutters?

Well, the TV crew of a program called “Animal Planet” believe they have recorded the sound of a yowie.

As well as the sightings listed on the yowie hunters website mentioned earlier, I found this on YouTube.

Matt McMahon is an SES worker from New South Wales. SES, in case you didn’t know, stands for State Emergency Service here in Australia. He’s part of a team of people who rescue you in floods, bushfires, cyclones, that sort of thing.

Not someone you would think of as a nutter. So do yowies exist? You decide…

Snake Bite First Aid in Australia: What You Need to Know in an Emergency
Close Encounters with the Wonderful Australian Wildlife
Swimming and Crocodile Risks in Northern Australia
Red-bellied Black's Keeping Snake Catchers Busy
An Australian Snake Attack Out Of Thin Air?

Next post: Australian Visas and Expression Of Interest (EOI): Caution!