As you know, I usually like to end the week with a YouTube video on a Friday. But this week, I’m kind of YouTubed out.

We had a YouTube video on Monday when we looked at the Mothers Day Classic at Canberra, and we had another YouTube on Wednesday frighteningly portraying Australia’s future following the possible effects of coal seam gas exploration.

I think that’s enough YouTube videos for one week. So today I’m going to talk about post boxes, or pillar boxes as they are sometimes called. Either way, it’s the red thing you pop your letters into to send them somewhere.

So, how do they compare between our two countries?

It’s a beaut, isn’t it? Complemented, for sure, by the London bus in the background.

As you can see, it’s red, it’s about 5 foot or 1.5 metres tall and it’s round. It has one slot for your letters at the top, but I vaguely recall seeing some postboxes in the UK that were wider and had two slots.

If I remember correctly, one slot was for mail destined for the UK and the other slot for international mail. Which brings me to….

Some of you might remember we lost our local Bellbowrie post office in the Brisbane floods of January 2011. Well, we got a new post office a month or two ago and with it a shiny new Australian post box… 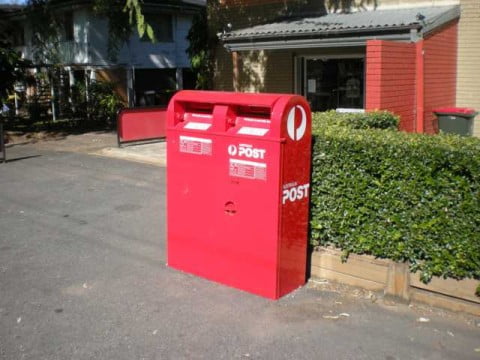 Unlike the UK postbox above, it has two slots in which to put your letters, one on the left and one on the right. Underneath each of those slots are written some words. I wonder what they say?

Perhaps one is for state mail and the other for mail heading to a different state? Or maybe, just like the postboxes I think I’ve seen in the UK, one slot is for letters posted to within the country and the other slot is for international mail?

So I carefully read the text on both sides. Apart from the Australia Post logo on the right, it’s exactly the same. 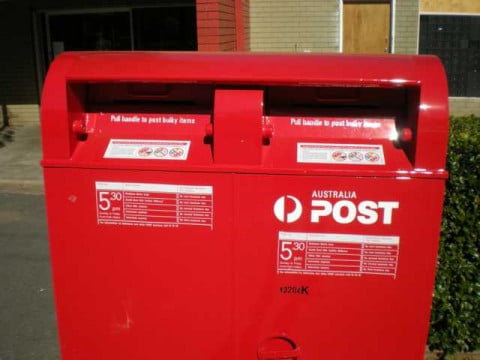 So why the two slots then? Anybody know?

Next post: The Rodeo at the Brookfield Show in Brisbane