It’s time for another one of those reruns of an article that I have had published in Australia and New Zealand magazine.

If you thought my last months rerun was out of sync, and I’m talking about the one called fireworks in Australia, wait till you read this one.

That said, imagine living in the UK (I know, many of you don’t have to imagine) and it’s the middle of winter. You stumble into your nearest Tesco or Sainsbury’s to do a bit of shopping, a chore you normally hate.

But on this occasion, you don’t mind so much. Shopping in the supermarket brings relief from the bitter cold outside, and as you walk around the aisles, you notice your teeth are not chattering with the speed they were outside.

Then, browsing the magazine shelves, you see this… 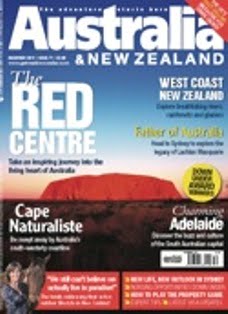 Yep, a picture of The Red Centre, the middle of Australia, one of the hottest, driest places on the planet.

How out of sync is that?

For the record, it wasn’t the driest place on the planet when we went, we saw a wet Uluru.

I hear it’s Christmas sometime about now over in the UK. Here in Australia, we have Christmas in July. My first introduction to this was when I came on holiday here in July 2004.

I remember walking through the airport terminal and finding, to my dismay, a ho ho ho-ing Santa surrounded by his carol singing assistants, reindeer and a sleigh! I knew it had been a long flight, but? Some of you, who perhaps didn’t know about this, may be quite shocked, but let me put your mind at rest. We also have Christmas in December, on the 25th, just like you.

So what is Christmas in July? Well, the real Christmas, the December one, is slap bang in the middle of the Australian summer. So it’s hot here, very hot! Now imagine cooking a full roast turkey dinner, with all the trimmings.

Imagine yourself opening that oven door after the bird has been baking for six or seven hours. That waft of heat that is so well received in colder countries at Christmas is not quite so pleasant here.

Traditional Christmas dinners just don’t work in Australia…. unless you cook them in July, during our winter. And with that thought, whoever had it, Christmas in July was born.

But what of the real Christmas? The one that’s happening now? I think I could live here for another 20 years and still not quite get used to it. This will be (edit: was) my fifth Christmas living in Australia, and like the four before it, it crept up on me all of a sudden.

My new warning signs for Christmas are the kids breaking up the summer holidays, the weather getting hotter and the days getting longer with it staying lighter much later. Unfortunately, my brain does not yet recognise these new signs. My first awareness of Christmas usually happens when my wife says something like “You do know it’s Christmas in two weeks time, don’t you?”

With those words, my relaxed manner is shattered, to be replaced by panic.

Christmas Day itself, you won’t be surprised to learn, often involves a barbecue, beers, wine and dips, the swimming pool kind. Fish and salad is usually the preferred meal of the day. Many people spend Christmas Day or Boxing Day on the beach; we have twice. When we went to Bribie Island, about an hours drive north for us, I enjoyed three personal “firsts” for a Boxing Day.

I didn’t have my first alcoholic drink till I got home at 8:30 PM; I was the designated driver. I went swimming in the sea. I had fish and chips on the beach. It was probably the best Boxing Day I’d ever had. Whether I stay at home or go to the beach, I really love my new outdoorsy Christmases here in Australia.

Christmas cards usually depict Santa on a surfboard or maybe sitting in a deckchair on a sun-kissed beach with a tinnie in his hand. Australians even have their own version of “Jingle Bells” too; It starts with “Dashing through the bush, In a rusty Holden Ute, Kicking up the dust, Esky in the boot….”

Yes, Christmases in Australia take some getting used to. I’m adjusting as best as I can.

Tagged as: Christmas in Australia, Christmas In July, Jingle Bells

Previous post: You Call That a Mushroom? This is a Mushroom!