I had a good idea of what I was going to do for today’s post when I was walking around the Harbour Town shopping complex over at the Gold Coast last weekend. You see, books here in Australia are quite expensive, but just as in the UK, we have cheap book shops too.

Five dollars a book seemed pretty cheap to me, so I went in to take a look. I found these two gems….. 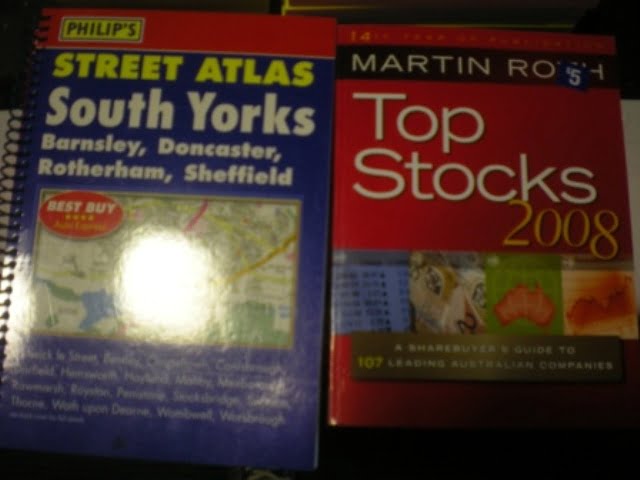 Clearly a Street Atlas of South Yorks, including Barnsley, Doncaster, Rotherham and Sheffield, along with a publication detailing the Top Stocks of 2008, are the sort of reference books anyone living in Australia 2011 would find hard to live without.

I expect to see an “all books for a dollar” closing down sale sometime soon.

You see, I thought that was funny. It’s not. This is.

Tax is the most abundant element removed from the wallets of all good and hard-working people around the Earth and the entire universe and cheeses people off far more than all the hydrogen, helium and oxygen put together. It is present in all known life forms, goods, services, whether organic or not making it the financial pain in the butt of all known life.

Now lets put the two together….

So what can be worse than tax? Yes, carbon tax! How can you tax the chemical basis of all known life? The whole thing is a sick joke, we’re all going to be ripped off and there’s a politician here in Australia who wholeheartedly agrees. And how!

Julia Gillard, our current Prime Minister of Australia, said before her election “There will be no carbon tax under the government I lead”. Well guess what? Now she wants to introduce a carbon tax. It’s causing a whopping great hullabaloo here in Oz.

So a few days ago Senator Mary Jo Fisher stepped up to the podium to have her say. This may well be the greatest political speech since Churchill’s beaches gig. But where Sir Winston’s speech was inspirational, this speech is more akin to Python-esque ridicule. John Cleese would have been proud.

To find out the real ugly truth about the people behind this con, take a look at my post called The great carbon tax swindle!

My thanks to regular reader Jonno for for sending me the link to the YouTube.

Next post: Is Australia a Good Place to Bring Up Children?

Previous post: Goodbye Forever? Who Will Visit You in Australia?