What is a Kiwi? And Want to be on TV?

Two blog posts in one today, totally unrelated. First up….

How would you like to get your fizzog the box?

I’ve been contacted by a man called Peter Beard who is a documentary film producer in the UK and has been commissioned by ITV to make an eight part series about moving to Australia. His main angle is to try and find out why some people love it here and others hi-tail it back to England.

He is coming to Australia in January and would like to visit expats in the Brisbane, Gold Coast and Sunshine Coast areas of Queensland for a chat. After said chat you can decide between you if you are going to be involved or not.

The series, which doesn’t yet have a title, is a Century Films Ltd production. Anyone interested should drop me a quick email via my contact me page and I will send you Pete’s email so you can get in touch direct.

So what is a Kiwi? 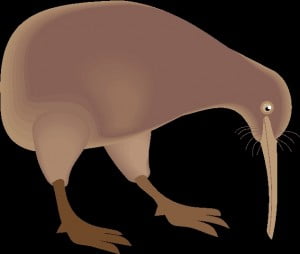 It’s a geezer (or girlie) from New Zealand, isn’t it? Yes, it is. But it’s also, well, Wikipedia put it so beautifully….

“Kiwi are flightless birds endemic to New Zealand, in the genus Apteryx and family Apterygidae.

At around the size of a domestic chicken, kiwi are by far the smallest living ratites and lay the largest egg in relation to their body size of any species of bird in the world. There are five recognised species, all of which are endangered; all species have been adversely affected by historic deforestation but currently large areas of their forest habitat are well protected in reserves and national parks. At present, the greatest threat to their survival is predation by invasive mammalian predators.

The kiwi is a national symbol of New Zealand – indeed, the association is so strong that the term Kiwi is used, all over the world, as the colloquial demonym for New Zealanders.”

The rivalry between Aussies and Kiwis is friendly, I think, but also very intense. So I felt confident I would be able to find a YouTube video to endear me to all my Australian readers, whilst at the same time mildly humiliating (in a friendly way of course) our closest neighbours.

Instead I found this touching and brilliant video about a flightless bird type of kiwi.

So cut yourself 3 minutes and 10 seconds worth of downtime, settle back in your chair and do what at the time of posting, over 28 million other people have done and watch this fantastic video……

Next post: Christmas is Coming, the Weather’s Getting Hot……

Previous post: The Cost of Living: Australia and the US Compared