Good GrrrrrrrReef! What Was He thinking?

I have had a really action packed weekend, not just because it was Easter, but because, well, I’ll tell you tomorrow.

But today, something more serious has cropped up that I felt needed mentioning. Unlike my post from last week, Australia in crisis, this time it really is a crisis.

You see, we have this really pretty thing here in Australia, you may have heard of it. It’s quite popular, over 1 million people a year visit it. It is known as one of the seven wonders of the world and is listed by the World Heritage.

And it’s got lots of pretty fish and corals.

Yes, some of you may have already guessed. It’s called the Great Barrier Reef! 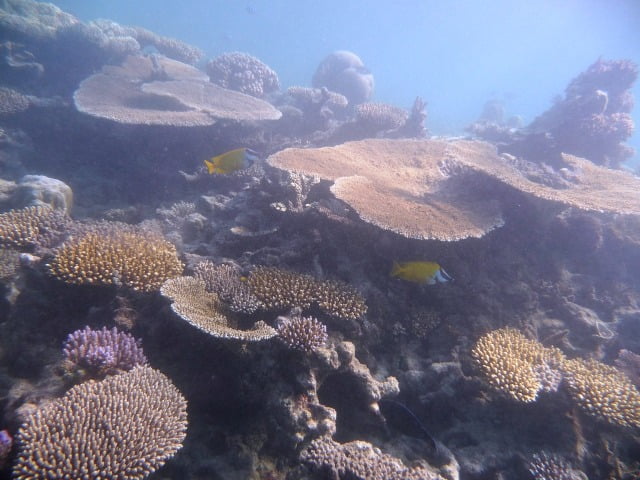 Well, on Saturday a ship called the Shen Neng 1, which had just collected around 65,000 tonnes of coal and 950 tonnes of oil from somewhere near Gladstone, was making its way back to China with its load.

Somehow, and for no explicable reason, it found itself 15 nautical miles off track. Travelling at full speed, no less, it grounded itself when it hit a shoal, ripping a hole in one of its tanks. Now, every time the ship gets hit by a big wave, that hole has another opportunity of getting bigger.

Oil has already been spilled.

I watched Sunday evenings 7News for an update on the situation, and they said not one, but THREE investigations would take place to try and find out how the ship came to be so far off course.

They then put up this image: 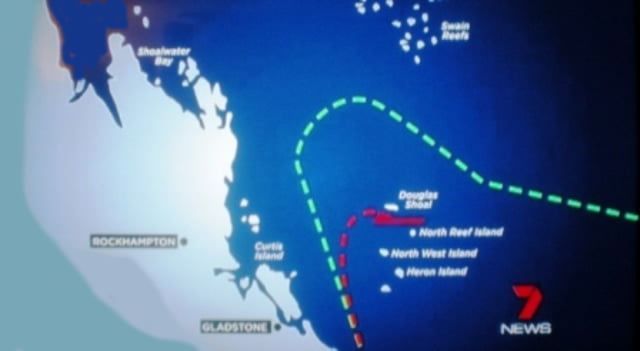 Thanks to 7news for the image and you can read more (edit: not any more, they’ve removed the story) about this incident over at their website.

Far be it for me to prejudice the results of such difficult and thorough investigations, but I couldn’t help being struck with one major thought on checking out those two paths. I wonder if any of you are thinking the same?

Turns out this morning that a few other ‘wise men’ on this Australian continent are thinking along the same lines. You see, the green route, the correct one, is an established shipping lane that caters for 6,000 vessels a year.

Failing to navigate it correctly is equivalent to finding a gap next to the hard shoulder, driving off of an eight lane motorway and heading across the fields.

I’m kind of guessing, but from the map it looks to me as though the red route would save about, ooh, 150, maybe 200 kms? Google tells me that the top speed of an oil tanker is probably around 15 knots. That could mean a saving of over 10 hours.

Turns out from the comments in this morning’s news that there is indeed an “established” rat run right through the reef. A rat run! Through the Great Barrier Reef! What is going on?

The rescue operation on this one will take weeks. The fear throughout is that the vessel breaks up completely, spilling its entire load. That would represent a major catastrophe for the Great Barrier Reef and Australia.

Over the last few days, assessors have become more confident of preventing that breakup as they inspect the damage to the ship. But there’s still a long way to go yet and a turn for the worse in the weather before this job is finished is probably now the biggest danger.

Again, Australia holds its breath. But it is possible that this event could have a positive result. If the ship doesn’t breakup and the salvage operation goes well, not too much damage will have been done.

And perhaps this incident will at last force the authorities to introduce stricter monitoring of ships in the area. These days, there are plenty of options to prevent this from ever happening again. Marine pilots could accompany ship captains or we could adopt a GPS or radar warning system.

But let’s hope that someone puts an end to rat run reef madness soon.

Snake Bite First Aid in Australia: What You Need to Know in an Emergency
Our Ninth Full Year Living in Australia: 2016
Close Encounters with the Wonderful Australian Wildlife
Swimming and Crocodile Risks in Northern Australia
A Thorough Look Around Cairns, Far North Queensland
FacebookTweetPinEmail

Next post: An Awesome Easter Weekend in South East Queensland