In my post last week about England versus Australia on Christmas traditions, I mentioned that some people around these parts can go a little crazy with their Christmas decorations. I promised to tell you more about that later in the week, but today, later than later in the week but certainly at the beginning of next week, which is now, I can.

This is just one of many houses that have become visible from 3,000 feet as we approach Christmas. Now, I know this sort of thing happens in the UK as well, but I’m not sure if they have yet made it into regional competitions. Or run bus tours around to see them all.

Well, they have here!

Here in the Brisbane area, the competition is divided in to north, south, east and west Brisbane. The house pictured above, which is in Indooroopilly in western Brisbane, was the best I saw. Not only did it have great lighting, but the guy who set it up had also built a whole host of fairground rides out of what looked like Meccano.

So Santa and his elves, among others, were having a wonderful time spinning around in these various contraptions. That was a nice touch and so was the live music show that he put on as well.

But his entry, sadly, didn’t even make the top three. The winner, in western suburbs, was this house…. 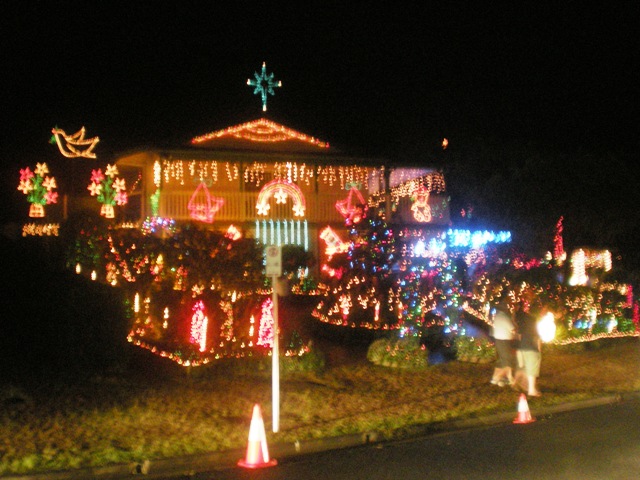 My apologies for the blurry photograph. I have yet to master all of the functions on my Nikon digital camera.

This is the home of Walter and Beverley Wood in Kenmore. The 70,000 lights that adorn their house has enabled them to win the 4KQ (4KQ being a radio station) Christmas Lights Best Lighting Display for the 19th year.

My picture cannot do the place justice, it was impressive. I can see why it won above the others. It was huge! Walking around the outside of the house, I actually lost my wife and daughter for about 5 minutes. There must have been at least 150 people, probably more, milling around taking pictures.

For those of you who like teasers, there is something very unusual in here, it only happens in Australia. Can you see what it is? I’ll tell you what it is tomorrow.

And I’m not talking about this unusual sight – a snowman in Queensland.

Next post: “Who Can That Be, That Flies Through The Sky?”