Your Complete Guide to Winter Weather in All Capital Australian Cities

This year, for the first year ever, I didn’t do my annual Brisbane winters versus London’s summers post. This led to a deluge of comments asking me why, assuming one single comment can be referred to as a deluge for artistic license.

Anyway, one reader wondered whether it was because the UK were having a heatwave at the time? No, I’d called an end to the series in the final post called How Do Brisbane’s Winters Compare with London’s Summers? when the score was 6-4 to London.

Well, the weather has not been too shabby here either, here’s how the beach looked up at Mooloolaba just last week… 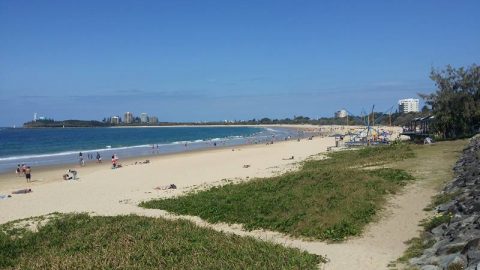 Today though, I’m going to go much further than just comparing Brisbane with London because, let’s face it, most people do not live in either of these cities.

Yes, now that winter has finished here for 2018, I thought it would be a good idea to take a close look at winter in Australia, that’s the whole of winter and not just the one day in the middle of winter, for all of our capital cities across the country and compare them with each other.

So, I have gathered together information from all eight of these cities, for June, July and August for winter of this year and put it all together in a stunning, easy to read set of quality graphics (more artistic license) by me to present to you for your climatic pleasure.

Apart from that first month, Sydney had a very dry winter. Average winter rainfall over the last 60 years though for all three months of winter was much higher at 311 mm with 34 rainy days.

It’s also been a slightly warmer winter this year by about a couple of degrees.

With 104 mm of rainfall throughout all of winter, that’s about two thirds of the 60 year average of 150 mm, so Melbourne have also had a drier than usual season. Temperature wise, it’s been slightly higher than the long-term averages, but not enough to write about. So I won’t.

As with the other two cities so far, Brisbane has been a little warmer than the 60 year average, but only by a degree or so. 81 mm of rain this winter in 24 days is lower than the seasonal average of 133 mm in 23 days. I remember that unusually cold day in June when the maximum daytime temperature was 16.9°C, it was a chiller for sure.

Or maybe I’m getting soft?

When it comes to Brisbane, it’s very hard to actually call this a winter at all.

Well, it certainly did rain a lot over in Perth this winter, they had more wet days than dry. Looking back at historic records, this year there was more rain than usual. The 60 year average for winter in Perth is 392 mm over 48 days. This winter saw 464 mm fall over 53 days with 186 mm setting a new record for August.

Temperature wise though, this year is not significantly different than the 60 year average.

The 19.2°C highest minimum nighttime temperature (second highest of the month was 14.7°C) recorded in August is probably a record high since records began. It happened on an evening following the daytime high of 25.4°C which was on Wednesday, 29 August.

Temperatures weren’t too different from seasonal averages, but rainfall was slightly down this winter compared to others.

Wow! Welcome to the capital of cold. Yes, you read that right, that’s MINUS 7.4°C. They must sell lots of pyjamas in Canberra. It’s the kind of shivering experience I haven’t come across in more than 11 years and I’m not sure I want to encounter it again either.

Rainfall though was very much down on seasonal averages, Canberra only had 65 mm over 30 days during this winter, compared to the usual 128 mm over 33 days.

Hobart was pretty chilly as well. Not too dissimilar from Canberra during the day, but at nighttime it doesn’t get anywhere near as freezing as Australia’s capital. Still colder than I would like though.

As for rain, incredibly historic records for June, July and August all say 53 mm of rain over 15 or 16 days is the average. So this winter, July and August are pretty much spot on, but June was a little drier than normal.

Finally, it’s time to check out hot and dry.

In Darwin they simply do not call it winter, it’s the dry season. I think it’s easy to see why. This weather is typical for a Darwin ‘winter’, it’s completely in line with the seasonal averages since 1941.

That said, Darwin has averaged 7.7 mm of rain during winter in that period, so 0.4 mm this winter is significantly lower. Either way you look at it though, it’s not a lot of rain.

My thanks to weatherzone for the statistics.

I can’t get the exact same information for London, but I can tell you this.

December has an average high temperature of 7°C, and a low of 3°C. On cold nights, the temperature will drop below zero. Rainfall average is 50 mm. January and February are pretty much the same.

Given that Australia’s coldest cities, Canberra, Hobart and Melbourne, all average highs of 13°C or above, then all of our cities offer better weather if you don’t like cold winters.

I suppose it depends whether you’re looking for a mild to warm winter, or a cold winter where you can rug up and sit around a fire at night time with a warm mug of tea. Everybody’s preferred weather is different. I do not like cold, which is why I live in Brisbane.

Hopefully my guide to winter weather in Australia will help you decide where you want to live.

So, where would you want to live?

Spring in Australia and an Early Start to Bushfire Season
The Truth about the Weather in Australia This Summer
Hot People's Day in Brisbane
How Do Brisbane's Winters Compare with London's Summers?
Australian Winters: How Cold Can They Get?
FacebookTweetPinEmail