In the 10 years that we’ve lived in Australia, we’ve bought quite a bit of stuff. Furniture, electrical goods, white goods, beds, houses, cars, all sorts of stuff.

As anybody who buys stuff knows, sometimes things go wrong. 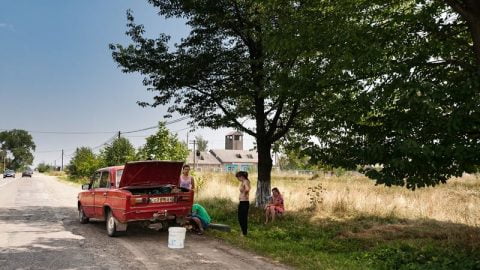 Of all the stuff we’ve bought, things have gone wrong on several occasions, and by and large these things have always been sorted out quite amicably and speedily by the retailers.

Recently though, we’ve had a bit of a spate of things going wrong with stuff we’ve bought. So, for the first time since I’ve been here, I went online to check out Australian Consumer Law (ACL).

Australian Consumer Law and the ACCC

The ACCC (pronounced A triple C) is the Australian Competition & Consumer Commission. As they say on their website…

“The ACCC promotes competition and fair trade in markets to benefit consumers, businesses, and the community. We also regulate national infrastructure services. Our primary responsibility is to ensure that individuals and businesses comply with Australian competition, fair trading, and consumer protection laws – in particular the Competition and Consumer Act 2010.”

It is in Schedule 2 of the above-mentioned Competition and Consumer Act 2010 where you will find the full text of Australian Consumer Law (ACL).

I found myself looking into the specifics of the ACL after purchasing an armchair here in Australia. For the last 15 or so years I’ve been sitting on the same leather armchair, one that was made for me by a furniture manufacturer back in England… 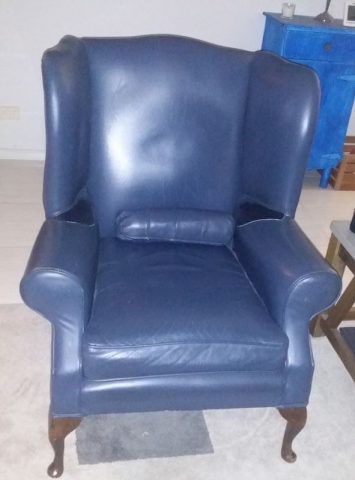 It’s still a great chair, but the leather, as you can see from the patchwork above, has started to fall apart. We’d been looking for a replacement for what seemed forever and found nothing suitable. Then we saw a pretty good-looking chair, and comfortable, from an upmarket Brisbane furniture store.

That wonderful leather armchair we had built in the UK cost £550. Adjusted for inflation, at today’s money, that’s equivalent of £863.50. At the current conversion rate of 1.80 to Aussie dollars, that makes my UK chair $1554.30.

So, at $1823 (plus $150 delivery), the Australian replacement wasn’t cheap, in fact it was the most expensive armchair we’ve ever bought.

Then, after just 3 1/2 months of sitting on the new chair, I noticed this… 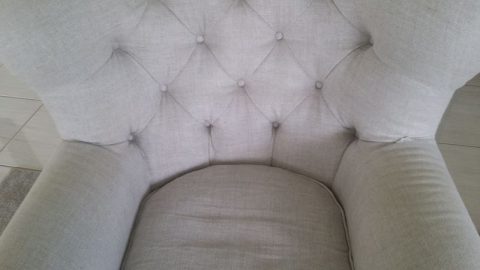 Here’s a close up… 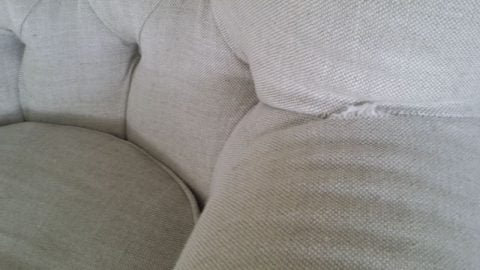 As you can see, the seam had already come apart on one of the arms, and it’s completely threaded.

The first place I headed to after noticing the defect was the warranty page on the website of the retailer from which it came. I was a bit shocked to see that they only offered a “twelve-month structural warranty on all goods“, as some furniture manufacturers offer two year, five year and even 10 year guarantees. My bad though, I should have checked the warranty before purchasing the chair.

12 months is the minimum warranty allowed under Australian Consumer Law, so the guarantee that came with this chair doesn’t exactly inspire confidence. I did not want it repaired, I’d lost confidence in it, I wanted my money back.

So next, I headed over to the ACCC and specifically their page on “Repair, replace, refund”. I wanted to know if I could demand a refund. Here’s what I discovered that I felt was specific to my situation:

Well, I certainly regarded the problem as major. If I’d have known it was going to fall apart within 3 1/2 months, that would have stopped me from buying it. It didn’t look as though this chair could be easily fixed within a reasonable time either, it looked like a complete re-upholstery job to me.

As for those other considerations, the chair hadn’t had a great deal of use in those 3 1/2 months, I think it’s reasonable to expect it to have been able to tolerate that use without a failure.

Armed with this additional knowledge, I sent a carefully worded email to the retailer…

We purchased this armchair from you in October of last year and took delivery of it in December 2017. Just before Easter we noticed that the join between the left arm and the wingback part of the chair had started to fall apart, see images attached. We immediately stopped using the chair.

Due to the nature of the fault, it would appear that a large amount of the chair would need to be reconstructed in order to fix it, and as such this represents a major failure which cannot be repaired easily. We have also been very disappointed to note that the seat has already begun to sag.

Given that this chair has had less than four months of minimal use, we feel the goods fail to be of an acceptable quality and if we had known that, we would not have purchased this item in the first place. Under Australian Consumer Law, we therefore request a refund in full. We also feel that you should compensate us in full for the $150 delivery charge.

On the retailers website warranty page, they claimed that I needed to return the goods at my expense.

Not true. Back to Australian Consumer Law:

The chair doesn’t fit in my car, so for my money, that’s “too large“.

And I also requested a refund of my $150 delivery charge, because Australian Consumer Law says you can claim compensation for damages & loss.

The retailer was uncomfortably slow throughout this whole process, but we got there in the end. They sent round an independent inspector to look at the chair and I had only one question to ask him as he left my house, saying he would provide a report to the retailer.

“Is this a major fault or a minor fault?”

“Oh, it’s major.” He said. “It’s a big job, assuming we can still get the exact same material. Quite a bit of it will need reupholstering. I wouldn’t fancy doing it.”

And with those words I knew I would get my refund. And I did, in full, including the delivery charge.

I mentioned a spate of these things earlier, here are the others and they’ve all happened since April of this year. After returning this chair, I purchase another one from a major Australian furniture retailer. I’d sat on the demo version in the store and it was really quite comfortable.

Some assembly was required when I got the chair home, it had a swivel base, but as soon as I completed the construction and sat on it, it felt different.

Very different from the chair in the shop. Also, it was 104 cm high, the description of the goods states it’s 108 cm high. Under Australian Consumer Law:

I phoned the salesman up the very next day and said “I’ve got a problem with this chair, it doesn’t feel anything like the sample in your store and the dimensions of the chair are actually different from the description.”

Whether my carefully worded sentence made a difference or not, I’ll never know, but the salesman immediately said “Bring it back and I’ll give you a full refund“. And he did.

I purchased a laptop computer from a major high-street store, the description said it had 128 GB of SSD storage. After I got it home, I discovered that it wasn’t SSD, but instead the significantly inferior eMMC storage. Again, wrong description, instant refund.

So I purchase another laptop computer from a different store, but it was very unstable and every time I closed it down, I got the following error message… 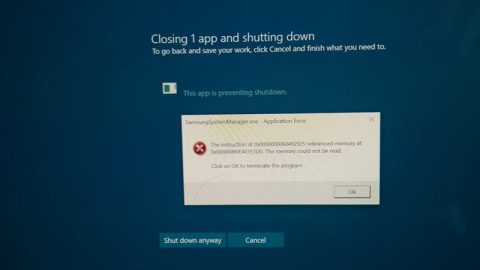 What I like about the ACL is how it defines things quite clearly, and it is that knowledge that gives you the confidence to get what you know to be within your rights. With the UK’s ‘Consumer Rights‘, on the other hand, the information isn’t so precise and many people end up having to go to see Citizens Advice for help.

“Never mind that Bob, what are you going to do about your armchair and laptop?”

Yes, I’ve now decided to get my existing armchair professionally reupholstered. Hopefully I’ll get another 15 years out of it. I also now own a little HP laptop that works very well.

For everything you ever wanted to know about Australian Consumer Law, visit: 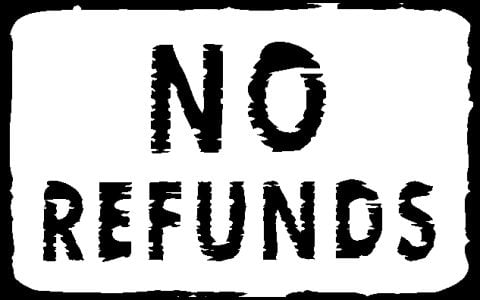 Not true. There are refunds. Back to the ACL…

Divorce: Australia and the UK Compared
Australian Cuisine and Some Foods I've Managed to Avoid
Moving to New Zealand Instead of Australia
RSL's and Other Drinking Establishments in Australia
Feeling Tense? Wash Away Your Brexit Anxiety in under Four Minutes
FacebookTweetPinEmail

Previous post: Microbreweries in Australia: Who Needs the Beach with These Crafty Changes?