Welcome once again to my annual comparison of Brisbane’s weather in the middle of winter with that of London’s in the middle of summer. No time for road trip tales today, this is important, we do this every year.

This is the ninth contest in the series, proving, if anything, that once I’ve got the bit between my teeth I never let go. Like the Ashes, this series could go on forever. Before we start, let’s just take a quick look outside of my front door here in Brisbane to see if we have a hot, sunny and clear blue sky day… 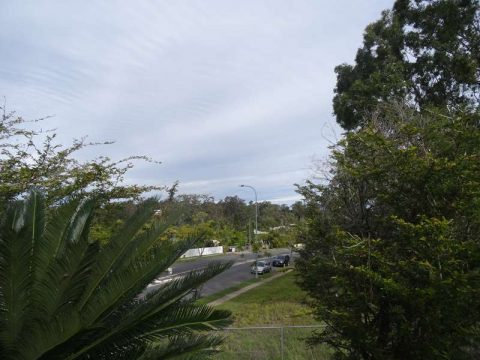 No, we don’t. It’s all looking rather cloudy.

It’s been an epic battle between these two cities, here are the results so far:

Yes, it’s been a cracking contest, but at the moment London have edged into a two-point lead. Looking at the newspaper headlines this morning, the odds have shortened massively on London extending that to 3 points.

‘Britain is gearing up for a mini-heatwave with 28C (81F) temperatures promising the hottest weekend of summer so far.‘ Source: Mirror online

‘BITTERLY cold, wild weather is sweeping across Australia as a powerful cold front brings strong, damaging winds to the east coast that are strong enough to bring down trees.‘ Source: news.com.au

As I write this, the people in Adelaide, Melbourne, Canberra, Hobart and Sydney are in what’s been described as a ‘monster cold snap’ and snow has fallen in some areas, including parts of Canberra. So, surely this years contest is a foregone conclusion?

No, it isn’t, because I live in Brisbane and that is the city we will be comparing with London.

It may have been a slightly cloudy day, but the sun was up there somewhere…

It may not have in particularly hot either, but the sun still had enough power to generate almost 2 kW of energy to my solar system…

Not bad, although on a hot sunny day it will generate at least double that.

This was the weather today in Brisbane: 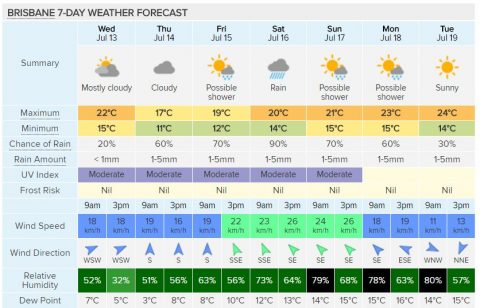 As you can see, Brisbane doesn’t really do winter, but even so, with that heatwave on the way, I’m sure London can do better than this.

This was the weather today in London: 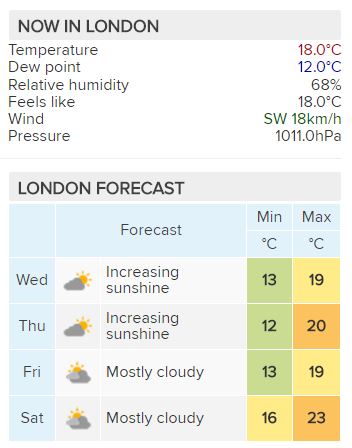 These weather forecasts have come from weatherzone.com.au, and I think it’s fair to say there’s not really much sign of that heatwave heading towards London any time soon. I checked with other weather forecasters as well, still no sign of 28°C. The highest temperature I saw for London on a 10 day forecast was 25° next Wednesday and even that said it would be partly cloudy.

So much for a heatwave then, catchy headline though.

This year, again, it is almost too close to call. There’s really not much choose between the two cities. However, we are comparing Brisbane in mid winter to London in the height of summer. The fact that it is so close is an achievement in itself for Brisbane.

I said earlier this series ‘could’ go on forever, but it won’t. It’s 5 – 3 to London at the moment, and although it really is too close to call this year, I’m going to award victory to Brisbane.

Two reasons really. Firstly, they beat London by 3° today, which is quite impressive and secondly, that makes the score:

At the same time, I’m going to declare this contest a best out of 11, so if London wins next year, they take the series. Brisbane need to win two on the trot to be the victors.

I’m so excited, I can hardly think straight.

Spring in Australia and an Early Start to Bushfire Season
The Truth about the Weather in Australia This Summer
Your Complete Guide to Winter Weather in All Capital Australian Cities
Hot People's Day in Brisbane
How Do Brisbane's Winters Compare with London's Summers?

Next post: More about the Bundaberg Region in Queensland