Huge Moths, Known As the ‘Rain Moth ‘, in South Australia

Last week, if you recall, my post was about Snaking Caterpillars: The Pine Processionary Caterpillar. Caterpillars, at some point, turn into butterflies or moths. Last week, some rather large moths showed up in the upper south-east of South Australia.

When I say big, I’d do mean big, as you can see from this tweet:

Um lol @SelinaGreen5290 look whose just jumped on board… pic.twitter.com/foDDYmeG0y

The scientific name of this moth is Trictena atripalpis. It is also known as rain moth, bardee, bardy, bardi grub or waikerie and is found in the southern half of Australia. The female can have a wingspan of up to 16 cm, that’s over 6 inches.

Let’s have a look at another one…

Just look at his little face… 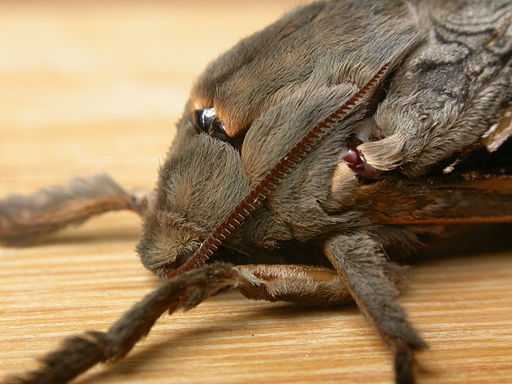 According to an old farming legend, these giant moths are supposed to indicate that rain is on its way. They could certainly do with it down that way, apparently the area around Pooginagoric in South Australia has been in drought for two years now.

Unfortunately for them, on this occasion the ‘rain moth” got it wrong, they’ve only had 4.2 mm of rain since these giant moths flew into town. That’s not even enough to dampen the soil.

Australia is certainly the place to be for moths though, apparently we have something between 20,000 and 30,000 different types of moths here compared with just 2500 or so recorded species in the UK. So you won’t be surprised to hear that the rain moth is not Australia’s biggest moth.

Not by a long way.

The female Hercules Moth has a wingspan of up to 27 cm, that’s over 10 inches and it’s the largest wing area for any moth in the world! You can see a picture of one of these moths along with another dozen fascinating and sometimes very large Australian insects.

No wonder they never run out of food in the jungles of I’m A Celebrity…Get Me Out Of Here!

My thanks to regular reader JohnOh from Wangaratta for putting me on to this story.

Next post: Burglary AKA Unlawful Entry with Intent: Statistics UK and Australia Compared