Choosing a High School in Australia: State or Private?

In January 2009 Elizabeth started junior school here in Australia. Here’s what that looked like…

In January of this year Elizabeth started high school as a Grade 7 student age 11. This is what she now looks like as she walks home from school…

She hasn’t actually walked all the way home from school, that would take way too long, the school she goes to is a good 10-15 minutes drive from our home by car. She actually got the school bus, which drives right past our house…

How did we choose Elizabeth’s high school?

Those of you who have followed Elizabeth’s story will know that she has been attending the local state junior school, but in our minds we imagined that when she moved up to high school we would probably send her to a private school. Mrs Bob was head of research on that one, and she has done a sterling job over the years.

I say ‘over the years’, because this kind of thing takes some planning.

Because generally speaking, if you want to send your child to a private school, you need to book a place in advance. It’s an interesting concept, and quite a costly one as you will see, but part of me wonders how necessary it really is.

I suppose there is a danger that some of these schools may have a limited number of spaces, but they are in the business of making money. If you decide you want to send your child to a private school at the last minute without reserving a place, and you’re happy to pay the fees, would they really turn you away?

That’s a question that almost certainly has different answers for different schools, but it’s one I’m not in a position to answer as I haven’t tested it out.

Private school options we looked at:

I’m going to give you the details of the private schools Mrs Bob and I looked at potentially for Elizabeth. There’s no point in mentioning these schools by name, it’s irrelevant, as it only applies to my immediate location. Australia, as you know, is a big country.

The first school we looked at was a private girls grammar school west of Brisbane which had a good reputation, and back in 2010 my wife was really keen that Elizabeth go there. So we paid a $50 administrative deposit to reserve a place at that time. But by the time they asked us for a proper deposit of $500 at some point in 2013, we had changed our minds about that school so didn’t proceed.

Having dismissed that option, at around the same time in 2013, Mrs Bob started to look at other options. There was a small private Catholic school about 25 minutes drive from us that she was keen on, the school itself looked as cute as a button. Both Mrs Bob and Elizabeth liked it when they attended the open day together.

At the same time there was another Catholic school that Mrs Bob really liked and again she took Elizabeth there for the open day. Unfortunately, Elizabeth really wasn’t keen, so we thought, you know what? She’s the one that has to go there for six years, so maybe we should consider that.

The school did hold a place open to us for a year at no charge, but when they did ask us for a serious deposit, $500 we think, we declined. That school, had we opted for it, would have cost around $12,000 a year.

By the way, these deposits are a good little earner for the schools. We know of one couple who reserved spaces at three of four schools for both of their children and the bills they were receiving got out of hand. In the end they just had to make a decision to save money.

Why were we looking at Catholic schools?

Well, we are not Catholics, but you’d do not have to be a Catholic to go to a Catholic school. Generally speaking though, they cost less than non-Catholic private schools whose fees range from between $15,000-$17,000 and sometimes much more.

State schools are the ones you do not have to pay large fees for. One of the top three state schools in Brisbane, if not in all of Queensland, is Brisbane State High School… 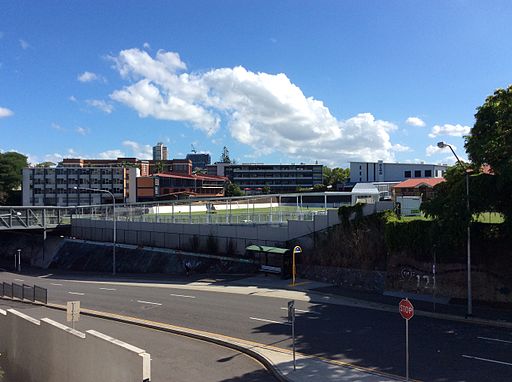 This school does offer a limited number of places to children who do not live in the catchment area, providing they attend and pass the tests they make available to Grade 5 students. Mrs Bob was keen for Elizabeth to take those tests, me not so.

I felt there was just too much commuting to get into the city from where we live; what child wants to spend three hours a day on the school bus? Yes, with all the stops and pickups, I think we would have been looking at an hour and a half each way.

I’m happy to say, we didn’t take that one further.

But they have them here. What are they?

I couldn’t possibly list all the extension programs available around Australia, but subjects include music, science, computers, humanities and maths extensions. There is also a gifted and talented extension for generally bright kids.

Then there are the language extension courses known as ‘immersion’ programs. I suspect because you immerse yourself in a foreign language and virtually every lesson you have from Grade 7 onwards is in that foreign language.

So, which school did we choose for Elizabeth?

Elizabeth was fortunate enough to be accepted for a local language immersion course at a state public school that has a very good reputation. The results achieved by this particular school were actually generally better than the two private Catholic schools already referred to here.

The language immersion course students achieved even higher results than the rest of the school generally did, so their results matched those of even more expensive private schools.

Our choice was simple.

I think a lot of people naturally believe that private (paid) schools will offer the best possible education for their children, that isn’t always the case. It pays to do your research, and you can do that online.

For more information, you can find out about the MySchool website on my page called Which School? Be sure to check out the additional helpful links towards the foot of that page, especially the one about temporary visa holders if that applies to you.

It’s only been a month or so, but Elizabeth is loving her new school. She loves the course she is on and she is thrilled to be going to a local public school.

Here are the advantages for her:

Here are the advantages for us:

Of course, is not truly free, we all pay taxes pay for these state schools. Then there’s the stationery and books we need to buy (about $300) and the laptop computer (about $1200) and the school trips and, at some point, international travel for the student exchange.

Do you need to choose a school in Australia?

The following page should help…

Australian Cuisine and Some Foods I've Managed to Avoid
Moving to New Zealand Instead of Australia
RSL's and Other Drinking Establishments in Australia
Feeling Tense? Wash Away Your Brexit Anxiety in under Four Minutes
EFTPOS - The Australian Cashless Culture

Next post: A Red-bellied Black Snake Scrounges a Lift

Previous post: How Many Towns and Cities in Australia and the UK Compared