Moving to Australia: Will It All Work out?

It would have been July of this year when I wrote the following article for Australia and New Zealand magazine. The article then appeared in their October edition. Today I’m reprinting the article here and it is now December, the end of the year. If ever any of my magazine articles summed up a whole year though, this article pretty much does that.

I’ve been writing about life in Australia on this website for seven years now, this year was the first year that I started warning people to do thorough research before coming over, especially those looking for full-time employment. Here’s the article: 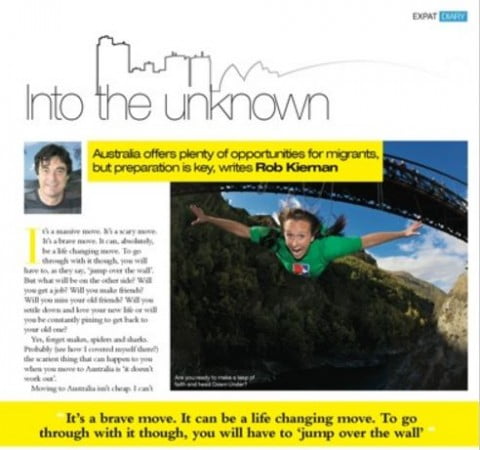 Yes, forget snakes, spiders and sharks. Probably (see how I covered myself there?) the scariest thing that can happen to you when you move to Australia is ‘it doesn’t work out’. Moving to Australia isn’t cheap, I can’t put an exact price on it, but ballpark we are talking ‘an arm and a leg’.

There are government fees, maybe MARA agent fees, perhaps skills assessment fees, medical fees, removal costs, flights and who knows what else. That’s just to get here, but your spending will continue when you arrive in Australia. You’ll need one or two little essentials, like a roof over your head and food. Very quickly, ‘will you get a job’ will become ‘I really need a job now!’

I mention this because I know these are the kinds of concerns many people are having at the moment. Eight years ago Australia probably was the land of milk and honey, if there is such a thing. Plenty of jobs, strong dollar, good economy and a bucketload of cash sloshing around in the government’s rainy day fund, which they called a surplus.

All that got spent following the global financial crisis in 2009 and fast forward to now. Unemployment is at its highest level since I arrived in 2007, 6% as at July 2015 according to the Australian Bureau of Statistics. Now is not the time to arrive in Australia on a wing and a prayer.

So, should you come at all?

Yes, most definitely yes, Australia certainly has opportunities, a lot to offer and it’s a great place to bring up kids. What I am saying is that you should come prepared. Be sure you have plenty of savings behind you; enough cash to survive without work for 3 to 6 months would be a very good idea. It takes the pressure off.

Research the job market thoroughly for whatever it is that you do, make sure there will be opportunities available to you when you get here. Better still, try and line up a job before you arrive, if you can. That isn’t always easy though, some employers are only interested if you are here, they can meet you face-to-face and you are ready to start.

For those that have already made the move though, the comments I get are far more positive. Like the one I got recently; “It is totally worth moving out here. I moved from Cardiff to Geraldton two years ago and have never looked back. It can be a stressful process, but so worth it.”

And I’ve never looked back either, and neither has anybody I know personally. We are all still here and loving it. So if you’re coming over, remember the Boy Scouts’ motto. No, not DYB DYB DYB, the other one.

Moving to Australia for a New Life Down Under
Australia Compared with the US, UK, India and Canada for…
Buying an Australian House; Housing Chain? What Housing Chain?
Househunting: Australia and the UK Compared
The Pros and Cons of Moving to Sydney or Melbourne