Archaic Health Services in Australia? Another Visit to the Doctor

Some time ago a reader called Shaun posted several comments (if this link breaks, please let me know in the comments below and I will fix it) on my website listing all the reasons why he returned to Europe after just five months of living in New South Wales.

Clearly Australia didn’t work out for him and his family, and he wanted to warn others of the potential dangers of a move down under.

He provided lots of information about the kinds of things he was unhappy with here in Australia, including the remark “…poor medical model, looks good to the layman, but to senior healthcare professional like myself it’s bordering archaic…”

It’s difficult for me to argue with that claim as the statement itself suggests only a senior healthcare professional can truly understand the state of Australia’s medical model.

As a layman though, I sure can explain how it looks from my point of view. 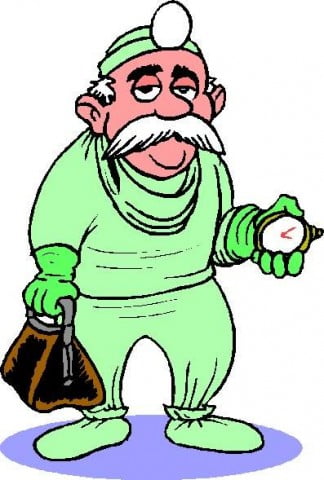 This is a true story of what happened to me recently. It all began very late on the night of Saturday 25th of July this year. At about midnight, I noticed that my left arm had started to ache.

I had no idea why, so it was a little disconcerting.

A couple of hours later the pain had increased quite dramatically, to the extent where I took a painkiller that had previously been prescribed to me by my doctor for a shoulder problem that I have.

These were strong painkillers, you only need one every 24 hours. I went to bed, but the pain continued and I couldn’t sleep. I got up at around 5 o’clock in the morning, paced around a bit, and took another one of those ‘once in every 24 hours’ painkillers.

Finally got to sleep at about 8 o’clock in the morning. Lucky it was Sunday.

When I eventually got up on Sunday the constant pain had gone, but there was clearly something wrong with my arm and certain movements made me yelp.

Here’s how it went from then on in through the Australia health system:

Similar to, but not exactly, this one…

Suggested treatment; anti-inflammatories for a few weeks and if it doesn’t get better, consider an ultrasound guided steroid injection into the left bicep’s tendon sheath.

The doctor also wrote out a prescription for that injection in case I needed it; I haven’t used it yet.

How much did all this cost?

There was no charge to me for the x-ray or the ultrasound.

Do bear in mind an important point here. I could use a ‘bulk billing doctor’ in which case the cost to me would have been zero. You can read more about bulk billing here…

I like my doctor though, I think he’s very good, so I’m happy to stick with him and pay the extra. It is also possible that if I did switch to a bulk billing doctor, they would be busier and therefore it would probably be more difficult to book appointments at such short notice.

It’s hard to imagine how that would have panned out in the UK. I would have either had to go private to receive that sort of speedy treatment, in which case the costs would, I’m sure, have soared dramatically.

Or I could have waited for free NHS ultrasounds and x-rays in which case I believe the timescale would have been vastly extended.

Or, I imagine I could have just turned up at A and E and queued up for the ultrasound and x-ray if it was felt to be urgent enough, but if I had done that, I’m pretty sure the waiting time would have been exhausting.

I mean several to many hours. It’s hard for me to know for sure, I haven’t used the NHS since 2007.

The way I see it though, and yes, I am only a layman, there is nothing archaic with the Australian medical model.

Previous post: Don’t Let Fear of Spiders Stop You from Moving to Australia