Margaret River had one more surprise for us whilst we were there. I ended Wednesday’s post, called Four Days in Margaret River, Western Australia, by mentioning that some people go to Margaret River for the surfing.

I included this photograph… 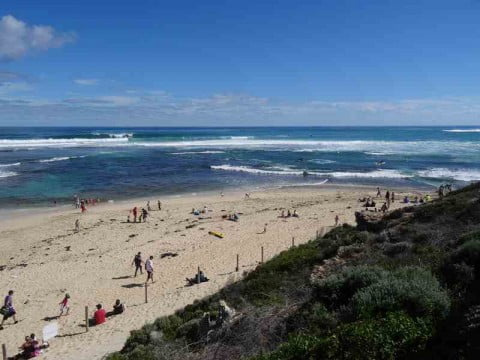 That’s not just anybody surfing out there though, those are professional surfers, because whilst we were there a very special event was taking place.

Professional surfing isn’t my sport, you won’t be surprised to hear. I know very little about it, but I think this event would have been one of the many held around the world to decide who eventually becomes the world surfing champion.

They choose the best global locations for surfing, and Surfers Point, which is where this event took place, has a bit of a reputation for kicking up some great waves. Internationally renowned in fact, and apparently the waves can sometimes be over 12 feet high.

Organised by the World Surf League (WSL), this event was on while we were in Margaret River, so obviously we went to check it out. 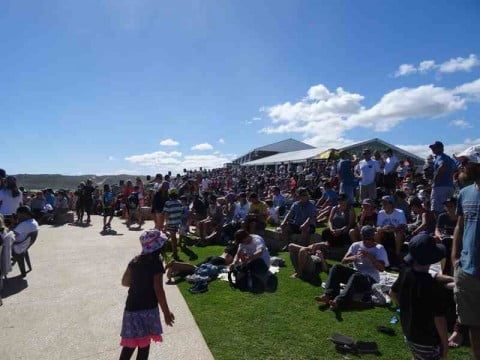 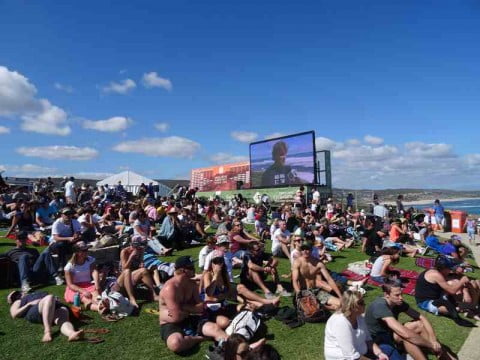 I’m not sure whether to take my hat off to the professional sport of surfing or to the people who organised this particular event here in Australia. But what other major professional world sporting competition would offer the following:

I was truly expecting to have to put my hand in my pocket when we rocked up to this event and I was pretty sure it was start with the car park. After all, there were a lot of cars parking there… 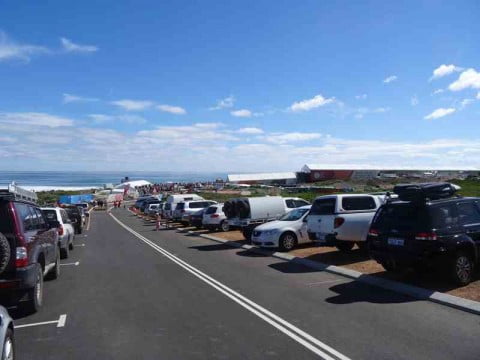 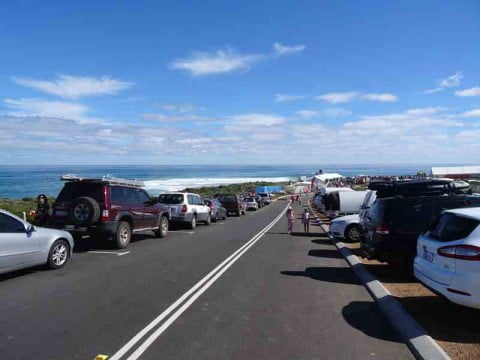 So many that they had to put on extra parking… 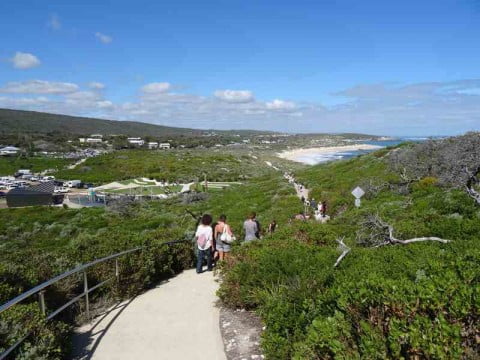 Along with parking attendants to show you the way. But no, parking was free. So I suspected we would have to pay to actually watch the surfing.

Nope. No turnstile, no entry gate, no ticket box, just walk right in. It was a free event. They were even giving away free bottles of water.

Yes, I would have loved to have taken my hat off to whoever is behind all that, but it was just too sunny.

How great this is, I was thinking, I can capture some video footage of professional surfers, maybe even a world champion. How great would that be on my website?

Then I heard an announcement that one of the heats was about to start in five minutes, plenty of time, I thought. Carried on chatting to Mrs Bob and Elizabeth, next thing I knew it was due to start in one minute.

“I’m going to head down to the beach to capture this on film and get a closer view.” I said.

I don’t know the rules of this sport, but from my time at this event it appears that two surfers go out about 100 metres or so, and then they have 30 minutes in which to catch some waves. I’m not sure how many waves they can catch, but I know it’s in their best interests to wait for the best waves before they put their energy into jumping on their boards to catch it.

How well they surf on those waves is then judged and they are given scores out of 10, similar to, say, gymnastics.

By the time I got to the beach and before I’d even taken the lens off of my camera, I heard the commentator say over the loudspeakers “Wow! That was the best start to a heat we’ve had all tournament. Not sure how we can top that one, that was fantastic!”

Yep, surfer dude fancied the very first wave that came along and rode it like a champ before I was even ready to hit record.

Oh, it didn’t stop there, the commentator kept going on and on about how amazing it was and I never even saw it, let alone capture it on film.

Then I stared for probably 15 minutes waiting for somebody to jump on another wave, nothing, they were waiting for a good one.

Maybe I’m not cut out to video surfing, but fortunately some people are and it’s even more fortunate that they have shed loads of these videos on YouTube.

You will find lots of videos on the World Surf League YouTube channel, unfortunately the video I had for you here today originally has now been taken down by them, so here’s the 2016 Margaret River final…

Surfing; Australia was made for it.