Tasmania: A Feast for the Eyes

A clever title really, but I didn’t think of it.

Every time I send an article through to Australia and New Zealand magazine I give it a very boring title. For the article that appeared in their July 2013 issue, I gave it the un-extraordinary title of “Tasmania”.

When it appeared in the print version the magazine gave it the title “A feast for the eyes”. Today I reprint the article here on my website and after a great deal of deliberation I have decided to combine the two titles into one great big fat mega-title.

Ladies and gentlemen, it is with great pleasure I present to you (drum roll) and here it is again…

Tasmania: A Feast for the Eyes

So this is my fourth and final article in my short series about plane hopping in Australia. We’ve already been to Adelaide, Alice Springs and Sydney, now we are off to Tasmania.

I did mention this holiday briefly in an article for this magazine almost two years ago about Aussie holidays, back then I explained we had gone to Tassie in search of snow. We did find it, up a mountain, but there’s much more to Tasmania than snowball fights… 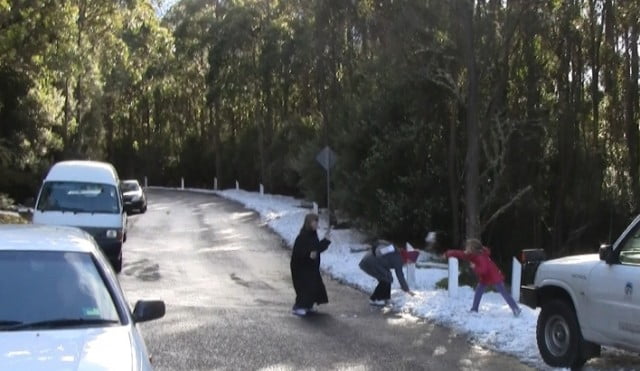 Tasmania could be likened to Cornwall or Devon, but I think it’s more like an Australian version of the Lake District. Apart from one significant difference, it is an island and completely separate from Australia’s mainland.

You can get to Tasmania by passenger ferry, you know, just like the ones used from Dover to Calais. Except this trip will take you about 10 hours one way, that’s why we plane hopped.

Our journey took about three hours to cover the 1791 kilometres by direct flight. That’s a similar distance as flying from Heathrow to Madrid and, you might expect, our longest domestic flight to date.

It isn’t though; incredibly Alice Springs is a couple hundred kilometres further from Brisbane than Hobart is.

Tasmania is certainly Australia’s coldest state, but even so, the weather compares favourably with the UK. Where England averages just less than 1500 sunny hours per year, it’s nearly 2200 in Hobart and over 2500 in Launceston.

Imagine England’s weather then, but slightly warmer by a couple of degrees throughout the year, with less rain, and replace much of the grey and cloudy with clear and blue. That’s the weather in Tasmania.

I went in the absolute middle of winter, daytime temperatures were very pleasant 12° C; I didn’t even need to buy a pair of gloves. What is really cool about Tasmania though is Hobart; it might even be Australia’s trendiest city.

Hobart is a foodie’s paradise with a list of hip restaurants to make your mouth water. It’s a wine lover’s heaven with around 20 boutique wineries surrounding the city. Beer drinkers can sup fine ales from one of the microbreweries.

The Salamanca Markets, held every Saturday, will bombard your senses with colours, sounds, smells and the iconic architecture of Tasmania. Am I exaggerating about Hobart? Lonely Planet placed it 7th in its list of top cities to visit in 2013, so it’s not just me.

What about traffic and pollution?

To top it off, Tasmanians breathe the cleanest air on the planet; apparently it’s as clean as it is in Antarctica. I also read that they are surrounded by some of the world’s cleanest waters, which probably explains why Tasmania is a paradise for seafood. Their Atlantic salmon, abalone, scallops, octopus, wild trout and rock lobster are served in the best eateries around the world.

During our stay there, we drove from Hobart to Launceston, pretty much the length of the island and for the life of me I just couldn’t find a traffic jam, and I even tried really hard between 5 o’clock and 7 o’clock on a Friday evening. If you get the impression that I loved Tasmania, then you’d be right. It’s somewhere I will definitely be plane hopping to again, this time during the summer.

I want to check out the beaches!

Bondi to Coogee Beach: A Sunday Walk Unlike Any Other
A Tasmanian Ten Day Tour with Itinerary
Australia's Ever Changing Economy; Have Sydney and Melbourne Peaked?
6 Must Dos in Cairns and Port Douglas; a Queensland Coast Road Trip
Finding Somewhere Nice to Live in Australia

Next post: The Irish in Australia: For Queensland and Country

Previous post: Oh No! Trouble with the Neighbours Part 2