I was referring to ants. 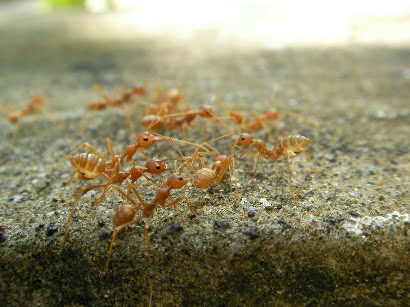 You will be pleased to know that I didn’t nip into my garden to take that picture. The picture is courtesy of Marufish who, I believe, took the photograph in Malaysia.

I will talk about the Red Imported Fire Ant in a minute. But let’s deal with the others first. Jumper Ants, Giant Bull Ants, Greenhead Ants and Bicoloured Pennant Ants are all aggressive and have quite painful stings.

Of the rest, some bite but not all. On top of that, the Jumper Ant really does jump and the Giant Bull Ant really is a giant. It is one of the longest ants in the world and can be up to 36 mm long. That’s almost an inch and a quarter to us.

Some ant stings have caused deaths in the same way that some wasp stings have, which is no surprise as ants and wasps are part of the same family. But deaths only occur if you have an allergic reaction to the sting and go into an anaphylactic shock. But as far as I can make out, no-one has died from an ant bite in this country. Antihistamines have taken care of that.

There, we can all relax.

For the record, since we have been here, we have all been stung by ants. My daughter was first, after walking barefoot through a small collection of green ants. She copped for about eight or nine stings on her feet and cried for about 20 minutes. We had heard the sting can burn for up to four or five days. But my wife put some cream on her, Elizabeth went to bed and by the morning it was all clear. She never mentioned it again.

I got nipped sitting on the grass during Queensland Day celebrations last year, causing a mild burning sensation for around 20 minutes.

My wife got stung a couple of months ago and yelped like a six-year-old for about 10 minutes. Then just got on with life. So ant stings are not such a big deal for us, but for anyone who is allergic it may be different.

Fortunately, the Red Imported Fire Ant has pretty much been eradicated or controlled. The very first detection of this ant in the whole of Australia was in Brisbane in 2001. This sparked off a national government led emergency response. This ant rapidly forms super colonies and they eat a lot. Eating stuff that destroys the eco-environment.

Here, it is legislation to contact the National Fire Ant Eradication Program if you see a Red Imported Fire Ant nest. Within minutes those boys will be out like Ghostbusters! Control of the Red Ant here in Australia is ongoing with continued monitoring, containment and treatment.

As far as I know, that containment programme has managed to restrict those ants to within the Brisbane region in which they were originally spotted. Although complete eradication is difficult, it can be an aim here due to the relatively small area of infestation. But we’re not there yet.

The rapid response of the Australian government to the arrival of these ants was largely due to the knowledge of how this ant, which originates in South America, swiftly spread through North America causing devastation. It really is the worst ant in the world. If it were to spread in Australia, it would probably pose the greatest ecological threat this country has seen since the arrival of the……

Oh, I’ll tell you about him next week!

Previous post: The Most Amazing Guarantee Offered by Anyone in the Whole Wide World