On Friday my daughter didn’t go to school, she complained of a poorly tummy and the constant need to rush to the toilet almost without warning. So she stayed at home. She was, of course, genuinely ill. If she hadn’t been, if she’d just been angling for day off, this would be known in these parts as “chucking a sickie”.

In the UK it is similarly named, but I believe is more common to say “throwing a sickie”. 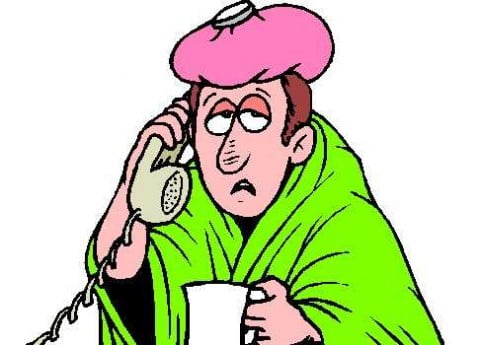 So, what’s the difference?

There is one very specific difference between our two countries in this respect, but I’ll get to that in a minute. First, a little background.

The vast majority of absences from work are genuine. Nobody can know for sure exactly how many sickies, whether they be chucking or throwing, are just excuses for a day off. Employers claim that it could be as much as 25%.

Most popular reasons for not showing up for work are flu, colds, sore throats, food poisoning, back pain, migraine, stomach upset and ear infection. These are all, obviously, genuine illnesses and are therefore great excuses for chucking a sickie.

Here are some stupid reasons for chucking a sickie:

In the UK, the first Monday in February is known as National Sickie Day when somewhere in the region of 350,000 people throw a sickie. It’s something to do with the excitement of Christmas, followed by the rush of the January sales, and then February turns up.

Dull dull February. Cold cold February. February the nothing exciting is going on. And, apparently, that first Monday in February is all too much for many people, so they throw a sickie.

In the UK it is calculated that 190 million working days are lost to the sickie, that’s an average of 6.5 sick days off per employee.

When we had Australia Day earlier this year, it was estimated that an additional 173,000 “sickies” would be chucked on the Friday by employees to make it a four day long weekend.

In 2009 it was claimed by a company called Direct Health Services that the average Australian worker takes 8.62 days off a year due to ill health. By the end of 2010, further Australian research suggested that figure had risen to 9.3 days.

When an Australian team won the America’s Cup in 1983 the then Australian Prime Minister Bob Hawke said “I tell you what, any boss who sacks anyone for not turning up today is a bum.” That led The Times in the UK to claim Australia was, “the spiritual home of the sickie”.

Maybe they were right, we do have a special name for it in Australia, it’s called “the doona day”. A doona here is a duvet or quilt, so a doona day is a day spent in bed.

Sickies: Australia versus the UK

I read on the Today Tonight website that Australians take about 50% more sick days per year than those in the UK. “In Australia, absenteeism levels are significantly higher than they should be. For example, they’re about 50 per cent higher than the UK.”

The above figures certainly confirm that, with 6.5 days compared with 9.3 days pretty close to a 50% increase.

Here are some more stupid reasons for chucking a sickie:

The big difference between Australia and the UK?

I mentioned earlier that there is one big difference between Australia and the UK when it comes to sick leave, and that is that here in Australia sick leave is an “entitlement”.

You can check this out for yourself on the Fair Work website which is run by the Australian Government. It says…

Sick leave is leave that employees can take when they can’t attend work because they are sick or injured.

Sick leave is a type of personal leave under the National Employment Standards (NES).

So, it’s kind of build in to Australian workers contracts, as a result, 11 per cent consider sick days to be part of their salary and take their full allowance each year.

And look how close they are to taking the full allowance, they’ve only got .7 of a day left!

As Lucy Rollins of the above-mentioned Direct Health Solutions said “There is an entitlement culture in Australia, much more so than in any other country, because most countries don’t offer a fixed number of sick days.”

I’ll leave the last word to the first commenter on an article about this very subject by The Punch. Calling himself “up the sicky”, he said…

“Your article might have some validity if the purpose of life was to surrender yourself like a slave to the betterment of an employer that would steal your kidneys if they had half a chance. Thankfully as an Australian I retain enough self respect to demand fairness and take sickies as needed.”

Get well soon to you all!

Have you chucked a sickie lately? Let us know in the comments below, but do use a false name, eh! You never know what your boss is up to…

Tagged as: Absenteeism, Chuck a sickie, day off, sick leave, Throw a sickie