Getting from City to City in Australia

Time for another reprint of one of my articles from Australia and New Zealand magazine, this one from their February edition. It was an enormous coincidence, of course, that the heading on the magazine cover for that month was “Stunning Sydney“, because my article was about nipping into the city.

Which city? I’ll give you three guesses. Here’s the article..

Nipping into the city

My wife and I, along with our young daughter Elizabeth, nipped into the city on Wednesday. We didn’t drive or take the bus, we got an aeroplane, because the city we were nipping into wasn’t ours, it was Sydney. I’ve never taken a domestic flight in the UK in all my life, but here in Australia, getting around the country is a different story. 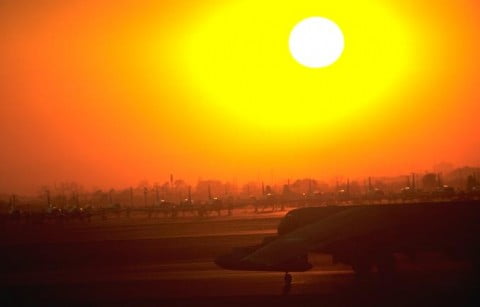 It struck me though, how painless and quick the whole process was; it is a bit like catching a bus. We bought our tickets online, but we couldn’t print them off due to several malfunctions with our printer. But no worries, we just turned up at the check-in, showed our driver’s licenses and we were in. We seemed to transport ourselves from our leafy green western suburb of Brisbane to the heart of the bustling city of Sydney within the blink of an eye. Well, not quite that fast, but fast enough for me to want to time it all on our return journey.

Here’s how it went.

We were sitting about six rows from the back of the plane on the way home and the flight attendants started to hand out the complementary cups of coffee to the front row first. As the trolley slowly made its way down the aisle in my direction, I leafed through a couple of magazines and flipped through all the available TV stations on the miniature telly about 10 inches from my nose.

I then settled for watching classic British comedy, QI with Stephen Fry, and was about halfway through when I was handed my hot cuppa. I hadn’t even finished it as the captain announced we were about to begin our descent.

In total, we were in the air 84 minutes and the jets tyres touched down on the tarmac at 7:25 PM. By 7:32 PM, we were picking our bags up from the magic roundabout in baggage reclaim. Five minutes later we were pulling out from the pickup point in the courtesy bus taking us to our off-site airport car park, who charged us just $15 a day.

By 7:45 PM we were driving home in our car and at 8:20 I was opening my beer fridge and grabbing myself a tinnie after such a ‘long’ journey. About four hours earlier I’d been sipping cider at the Opera House. By the way, we had a fantastic time in Sydney; I saw a side of the city I never knew existed. The harbour and all the areas around it are truly magnificent.

We’ve nipped into other cities by aeroplane too; Adelaide, Hobart and Alice Springs. We’ve already visited Melbourne by car and we are planning to ‘pop’ over to Perth sometime soon this year. I’ll do more than just drink a coffee on that one though; it’s a 5 hour flight.

As we live in Brisbane, that will only leave Darwin and Canberra of the big cities yet to explore. But there’s more to Australia than the big 8; I could actually fly to over 20 destinations from Brisbane.

Australia is a big country, but sometimes it’s almost as though you can fit it in your pocket and whilst I love road trips, for mini breaks, you can’t beat a bit of plane hopping.

Next post: Sea World and a Special Encounter with a Dolphin

Previous post: More Things To Do During the School Holidays