Finding a Job in Australia versus the UK: Part Two

About two years ago I wrote a post about job availability here and in the UK. You can read it if you want, it’s called Finding a Job in Australia Compared with the UK. But for those of you who’d rather not go back and read an old post, here’s the gist of it.

I explained that in 2007, when we first arrived in Australia, the place was booming! Almost all tradies were busy, the difficulty was getting one to turn up, they had so much choice.

But by 2010, things had definitely slowed down, although Australia was not exactly suffering the full effects of the Global Financial Crisis.

I then looked at the number of vacancies being advertised by the top three employment agencies online in both the UK and Australia, and came up with the following table…

There were a few explanatory notes with those tables which I wont run past you again, but this my conclusion at the time.

I felt that the two best websites were Reed in the UK and Seek in Australia for a direct comparison between our two countries. It was also pretty obvious at the time that Australia, with about one third the population of the UK, had a lot more job vacancies per capita than in the UK.

Two years on, the update?

I’ve not heard anybody mention the word “boom” here in Queensland for a very long time, and I’m not sure the rest of Australia is doing much better either. Western Australia was supposed to be booming, but I’m really not sure that is still the case.

Certainly some (often remote) mining towns scattered variously around the country are booming, but that’s about it.

Here are the latest (June 2012) unemployment percentages, state-by-state, as provided by the Australian Bureau of Statistics…

Back in the UK, although unemployment fell by 51,000 in the three months to April 2012, the jobless rate is still 8.2% according to this report by the BBC.

Unemployment then is creeping down in the UK, whilst here in Australia it has gone up slightly over the last quarter.

So I decided to do some more research on job vacancies in the UK and Australia, here’s what I got… 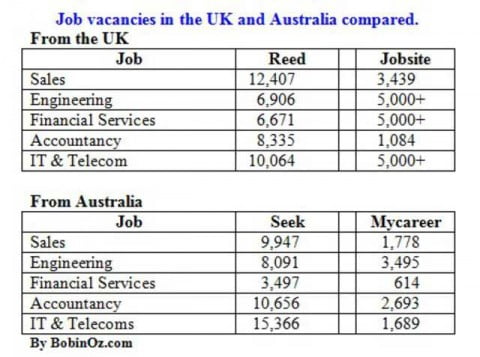 The Manufacturing and Executive jobs category seems to have disappeared, so I’ve replaced it with Engineering, but that’s just for interest. For comparisons sake, we’ll just look at the other four categories.

So, evidence suggests that although the unemployment and job vacancies situation in the UK is improving whilst getting slightly worse here in Australia, Australia still has way more jobs available per capita than the UK.

Don’t forget, those figures above ignore the Engineering category, but…

Where are all the jobs in Australia?

According to Reed, here are the top five locations for the five job categories we’ve looked at above…

Australia then, still appears to be a better bet for jobseekers compared with the UK. Most vacancies here in Australia, as you would expect, are in Sydney, followed by Melbourne, Brisbane, Perth then Adelaide.

Unless you’re in engineering, in which case “Go West!”

My thanks to Reed, Seek, Jobsite and Mycareer for giving me the tools to do this research.

Divorce: Australia and the UK Compared
Is Australia Finished? A Comparison with the UK and the US
Australia's Economy: CommSec's State of the States Report July 2017
Australia Compared with the US, UK, India and Canada for…
Buying an Australian House; Housing Chain? What Housing Chain?
FacebookTweetPinEmail